Whoever was Barack Obama’s vice president prepared his whole life for this day. Obama’s Support, His Tragic Personal Losses, and an Ongoing Fight for the White House

If he won the United States elections, Joe Biden would have dedicated his entire life to the matter: he would be the oldest president to take office, at 78 years old. He would fulfill them really happily, on November 20, 17 days after the most belligerent political competition in recent decades —in which, until the last moment, he maintained an advantage of between 6.7 and 8.5 points over his competitor, the incumbent president, Donald Trump.

He would not be a stranger in the White House, much less in Washington DC: the Democrat was Barack Obama’s vice president during his two terms, 2008-12 and 2012-16, and since 1972, when he came to the Senate to represent Delaware, he has been part of the city landscape. In this aspect, he embodies exactly the opposite of his competitor: Trump is the first president to take office without a previous political career and made it a proclaimed virtue, against the political establishment that seems to have exhausted a good part of the American electorate.

However, given the characteristics of the management that the Republican has carried out, Biden is also his opposite in another sense: it seems a promise of predictability. And a few million people could take advantage of something like this in 2020, exhausted by the political tensions and uncertainty of the COVID-19 pandemic.

After four years of Donald Trump’s administration, Biden seems the opposite in terms of the promise of predictability. (REUTERS/Bing Guan)

And on the coronavirus crisis, in particular, Biden has focused on communicating the public health message that the Republican was not issuing. Where Trump did not wear a mask, Biden appeared in a black model in tune with his aviator sunglasses; every time he had a pulpit he spread science-based advice — medical and epidemiological, but also economic — on how to act to preserve lives and keep the country going. He recalled that he had everything to do with the arduous negotiations to pass the Affordable Care Act, or Obamacare, which Trump has tried to dismantle; He also said that – due to the tragedies of his life – health is “something personal” for him.

Biden got there in the White House after three attempts in the Democratic primaries: 1984, 1988, and the same 2008 in which he joined the Obama formula to help compensate for the image of the candidate, a young and energetic senator from Illinois. with little political experience. Sometimes it seemed that his role was narrow: in 2012 he said that he felt “completely comfortable” with same-sex marriage, something that Obama had not yet said and perhaps should have rushed to say, so as not to be left behind.

In any case, that 2008 Biden made an extra contribution to Obama’s candidacy, who seems to return the favor—”the best vice president there ever was in the United States,” he called it— these days: he took a bit of the street, a tone and personality that connected with the minimum wage worker who needed to be convinced to vote. Biden grew up in a blue-collar town, Scranton, in northeastern Pennsylvania, where his father worked two jobs: cleaning boilers and selling used cars.

“I don’t think you’re a racist, but…” Kamala Harris began her accusation against Joe Biden, during the Democratic primary, for his collaboration with legislators who opposed school bus programs to reduce segregation in the ’70s (REUTERS/Kevin Lamarque)

Both the — named Joseph, like the Democratic candidate — and his mother, Jean Finnegan, taught him to be strong, he recognized them many times. “The measure of a man is not how many times he is thrown to the ground, but the speed at which he gets up”, his father used to tell him; on one occasion he came home crying, affected by the bullying of another child in the street —Biden suffered a stutter in childhood, which he overcame with a very hard exercise— and the mother, instead of consoling him, suggested that the day The next time I punched him in the nose to settle the matter. “This way you can walk calmly,” he argued.

The family moved to Mayfield, Delaware, when Biden was 13 years old. He worked as a window washer and weeder to help his parents, who wanted to put him through college but couldn’t; when he graduated from Archmere Academy— where he also stood out on the football team for his passing skills—he studied history and political science at the University of Delaware, although he was more interested in girls, he recalled.

In the spring break week of 1961 he traveled to the Bahamas and met Syracuse University student Neilia Hunter and was “knocked out with love at first sight.” education: he needed better grades to get accepted to Syracuse Law School, he married his girlfriend in 1966.

At the end of the most contentious political competition in recent decades in the US, Joe Biden held a 6.7 to 8.5 point lead over Donald Trump. (REUTERS/Kevin Lamarque)

In his first year as a graduate student, he had a problem: he did not properly cite a reference, as he later described. He always said it was unintentional; But when he was accused in 1988 of having plagiarized excerpts from a British Labor leader’s speech, some of his opponents began to accuse him of a tendency to cut & paste. In any case, he had more serious things to worry about that year: What seemed like a headache from campaign efforts turned out to be a pair of life-threatening aneurysms.

He had surgery; as a consequence, he suffered clots in his lungs. He needed another surgery, just for that. After seven months he returned to politics. To get through that time of complications, he only focused on one thing: reminding himself that he had been through much worse things in his life.

In 1972, as he was to begin the first of his six terms for Delaware in the Senate, his wife, Neilia Hunter, and their infant daughter, Naomi, were killed in a car accident, while their two sons, Beau and Hunter, they were seriously injured. A historic photo has traveled the media in recent weeks: at 29, the youngest senator ever elected was sworn in at the hospital where he cared for the little survivors of what had been his family.

Widowed and losing a daughter in 1972, Biden commuted back and forth between Wilmington and Washington, DC, so he could be with his two other children, Beau and Hunter, and work. (REUTERS/Kevin Lamarques)

Since then he has been known as the senator with the most train hours in the chamber: every day he traveled back and forth between Wilmington and Washington DC so he could be with his children, take them to school in the morning, and put them to bed. at night. For five years he raised them alone, with the help of his sister Valerie and other relatives; At the end of that time, and after a short courtship, he married his current wife, Jill Biden, a tertiary education teacher, with whom he had another daughter, Ashley, in 1981.

Biden’s long career has earned him various criticisms along the way, and some of them were revived, together, on the occasion of his candidacy. Even his running mate, Kamala Harris, rebuked him when they were still competing in the primaries: ” I don’t think you’re a racist, but… ” he began his speech about how he had collaborated with legislators who opposed the programs. of school buses to reduce segregation in access to schooling.” In California, there was a second-class girl, who has transported thanks to those programs. That girl was me,” he told her.

Biden defended himself: he had always believed in the importance of working together with those who thought differently to pass laws and had often accepted a very low common denominator. But the matter came to nothing when both were integrated into the Democratic proposal for the vice presidency and the presidency. In any case, another outstanding issue was that in 1994 Biden was among the main promoters of an anti-crime law that today is considered fundamental to exaggerated sentences and the problem of mass incarceration, which affects African Americans to a great extent.

In 2003 Biden voted in favor of the invasion of Iraq, which he promoted by Republican President George W. Bush, his critics recall. Another controversial episode has been his intervention in the Senate Judiciary Committee in 1991, during the confirmation hearings of Supreme Court Justice Clarence Thomas, who had then been accused by Anita Hill of sexual harassment; Hill went through an ordeal of statements, barely being heard.

He himself was accused of unwanted physical contact by many voters, and in 2019 a former member of his staff, Tara Reade , said that she had felt uncomfortable with him in the Senate offices in the ’90s; in 2020 she added that he had sexually assaulted her in 1993. Biden and his campaign denied each case. In making his candidacy official, moreover, the former vice president acknowledged a certain lack of sense about the proper social distance and put it on the account of his sympathy without reservations. He promised to be more aware and to be more careful. 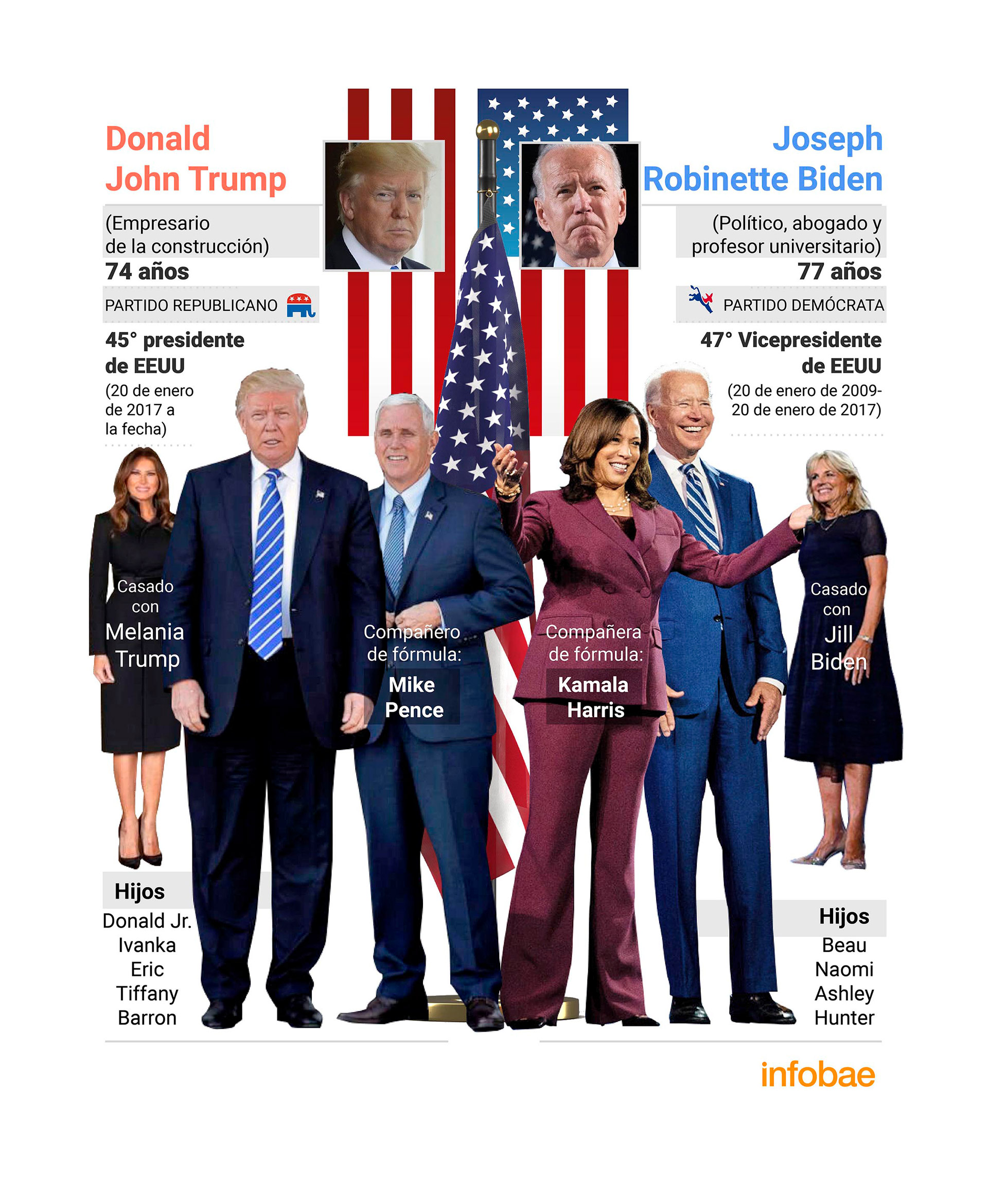 The de facto favorite also doesn’t pay attention to criticism of his neglect. More important things are at stake in the presidency: somehow the competition – which, win or lose, will be the last for him – is closely associated with the memory of his eldest son, Beau, who convinced him to try again and shortly after he died of brain cancer, aged 46, in 2015.

His other son, a Hunter, has been at the center of political controversy in recent days since two weeks ago the New York Post published an email that Vadym Pozharskyi, number three of the Burisma company, would have sent to Hunter, who he was paid as a consultant to that Ukrainian company when the candidate was acting vice president: “Dear Hunter, thank you for inviting me to Washington DC and giving me the opportunity to meet your father and spend some time with him. It is truly an honor and a pleasure.” The correspondence contradicted Biden, who has denied both the meeting and Hunter’s role in anything that could be considered influence peddling.

Adjusting masks is key to protecting against covid-19

Biden will return to leasing public land for oil drilling